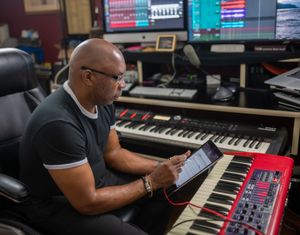 Mr. Robinson has secured publishing deals with both EMI Music Publishing Company and Motown Jobete Music, Inc. He is an active member of BMI and ASCAP and has served as a board member of the Philadelphia chapter of NARAS of the Grammy Recording Academy. He is an accomplished performer and writer, having been selected to play keyboards on the two-time Grammy-winning CD "Standing in the Shadow of Motown" tour, as well as a tour with bassist Gerald Veasley. His song "Constantly" was recorded by Vanessa Williams and most recently by Nina Girado (seven-time Platinum female vocalist). "Constantly" can be seen on YouTube with over 1.2 million hits and counting.

In addition to his duties with S.O.W. Productions, Mr. Robinson is the Director of Music at St. Marks Lutheran Church in Philadelphia, PA. He is the father of three children, (Lyrica, Jacquelyn and Donald Jr.). He graduated with a degree in Fine Arts from The University of the Arts  in Philadelphia and an Associate of Arts from Community College of Philadelphia.

“Playing without passion is inexcusable! ”

Grammy-nominated record producer Donald Robinson has been one of the most sought-after producers in the Philadelphia area. He has 4 gold records under his title and is able to produce a vast variety of genres of music. His credits include Jazz, R&B, classical, film scores and movies. He has written, arranged, and produce songs for Grover Washington Jr, Phyliss Hyman, Vanessa Williams, Rachell Ferell and many others. Specialties: Record production, Songwriter, Keyboardist, Flutist, music, and manuscript writing.  His credits also include Choir Directing and Music Directing.

I Can't Help It Video